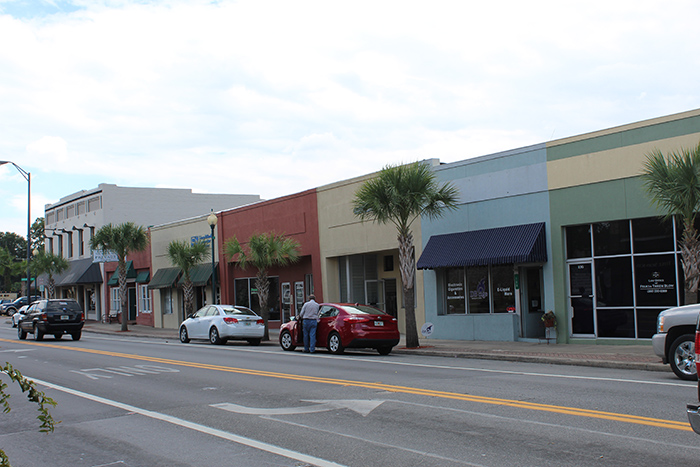 It’s a Friday night in Live Oak, Florida (pop. 9,974) and Festival Park is bustling. Neighbors stream into downtown to see live music and a family movie screening after dark. All ages are out, music echoes off the downtown buildings, and the events spill into the street, over to the emerald green lawn of Millennium Park.

This vibrant monthly event, First Fridays, held since Spring 2015, is a far cry from the scene in June 2012 in the aftermath of tropical storm Debby, when the site of these two parks was a large sinkhole that caused several buildings to be demolished. With the initial repairs needed to make the space stable and usable, community members, including Katherine Allen from the Suwannee County Extension Office, decided the city had to do more than just rebuild, but to build back a stronger community.

Phase I of rebuilding included the cleanup after the storm. However, the 2013 the Citizens’ Institute on Rural DesignTM (CIRD) workshop was viewed as an entry into Phase II, a critical chance to help shape a downtown district and public spaces that do more than survive, but thrive.

To get there, the community set out to create a shared vision and identity for Live Oak as a vibrant community friendly to pedestrians, small businesses, and new ideas. CIRD was the program that helped unite the community to hash out a plan.

Since the workshop in November of 2013, positive changes have taken root in Live Oak. By engaging the artist community, the Live Oak Artists Guild, the small business owners, key decision makers, such as the director of the Live Oak Community Redevelopment Agency (CRA), and the community at large, the CIRD workshop effectively mobilized different groups towards a common purpose and vision. The Live Oak CRA was able to make targeted investments in green space, programming and pedestrian infrastructure, with the knowledge and reassurance of community backing and stewardship.

Over the past three years, the Live Oak CRA has continued fostering improvements to small businesses, with added attention to ensuring these amenities are well connected to public spaces, such as Heritage Park and Gardens. This increased consideration for community walkability was a result resident input heard during the workshop.

Since the fall 2013 CIRD workshop, three new restaurants have opened around downtown Live Oak, including Pomodoro, an Italian restaurant that first opened its doors in 2013, and recently moved 4 blocks closer to the downtown district, where there is far more foot traffic. An upscale eatery, The 406 on Duval recently opened in the historic Thomas Dowling House, just next to the old railroad Depot and Historical Museum. You Got Served, a coffee shop and café, opened near the stately 1920s Live Oak Court House building.

The city has seen a variety of new services open their doors as well. A computer repair shop, a dentist’s office, a realty firm, and a social service organization, Love Inc. have all chosen to set up shop in Live Oak’s downtown corridor. What’s more, five new shops selling everything from clothing, to cosmetics, to antiques have added vibrancy to Live Oak’s main street, replacing once vacant storefronts.

Kathy McGhin, owner of B Posh clothing and accessory boutique, opened her store in downtown Live Oak in late 2014. When asked about the recent changes in downtown Live Oak since the workshop McGhin remarked, “Everyone agreed on the changes that need to happen to preserve our small town values while promoting economic growth… I see the growth of downtown businesses as basically the growth of our community and the future for our children…it’s not going to happen overnight, but there are definitely a lot of people who are committed.”

A small business development consultant, hired through the Florida Small Business Development Center in partnership with the University of Central Florida, was instrumental in aiding other small businesses in Live Oak, such as a new ice cream shop called LOFT: Live Oak Frozen Treats.

Existing and new businesses alike have benefited from Façade Improvement Grants, managed by the Live Oak CRA and funded through City and County Tax Incremental Financing (TIF). These grants, at a maximum of $8,500 each, have been put to good use, fixing windows and doors and adding improved signage, awnings, and landscaping to the ever-increasing number of downtown businesses.

While these CRA grants were established before the CIRD workshop was held, Katherine Allen, a chief organizer of the workshop, credits the momentum and concerted vision created during the workshop, as largely a responsible for the collective effort among businesses to improve the appearance of Live Oak’s main street through beautification. As it turns out, the façade improvements have led a shared sense of responsibility to keep the downtown tidy and visually appealing. Once a few shops improved their exteriors, many other shops followed suit.

Just before the CIRD Workshop, Live Oak’s Heritage Park & Gardens held its grand opening in the Spring of 2013. The green space, housed on the site of a now vacant estate, was provided by The Florida Community Land Trust.

Since then, pedestrian connectivity to the park, a key element of the vision from the workshop, has also come to fruition. The Live Oak CRA invested over $320,000 in improving the pedestrian infrastructure around Heritage Park along Helvenston Street. New sidewalks, fencing, pedestrian crosswalks, and signage were installed along Helvenston. In addition, the investment has provided a recreational corridor for pedestrians and runners and has created a critical, walkable linkage from Heritage Park to the downtown business district.

Live Oak residents have ensured the park is well utilized and maintained. Planting in the gardens is managed by the Friends of Heritage Park Gardens, a group of residents who were engaged during the CIRD workshop. The Live Oak Artists Guild, another group who participated in the workshop, is considering utilizing one of the ground’s buildings to house classes, studios, and exhibition space. Further, a brand new playground was constructed using tax rebates and incentives provided by the local school’s health insurance company.

Improvements to public space have only accelerated since the CIRD workshop. Thanks to the Live Oak CRA, the Tourism Development Council, local donations, as well as a fundraiser held by the Live Oak Police Chief each year, Millennium Park and Festival Park have also been developed, coupled with programming to ensure these community assets become well used and treasured. Programming includes the Live Oak Farmer’s Market each Saturday, the “First Fridays” live music, the annual Jazz, Arts and Blues Festival, the Raid on the Suwannee--an annual civil war reenactment, and the Freedom Festival--Live Oak’s Independence Day celebration.

A $15,000 Smart Growth Grant presented by the Lake City Board of Realtors and the American Association of Realtors is being put towards design elements that will convey Live Oak’s distinct identity and sense of place, as envisioned in the CIRD workshop. One idea currently being explored involves hand-painted murals downtown, each composed of many tiles individually painted by community members.

To top it off, Live Oak has a list of other projects currently in the works. These include a convention center, a dog park and a future Amtrak station.

The proposed Amtrak station for Live Oak, is located just next to the Suwannee Historical Museum in the old railroad depot. While plans for the station are still pending state and federal funding, the CRA cemented Live Oak’s commitment to bringing rail back through the City when it purchased the land (3.760 acres) between the tracks and the museum for $245,000 in July this year. This area will host new shade structures, and other improvements that will make the site Amtrak-ready and show state-level officials Live Oak is serious about promoting rail ridership.

Perhaps the most notable outcome as a result of the Live Oak CIRD workshop was dramatic shift in attitude. “The most significant achievement has been people working together more cooperatively than in the past, because they saw they had a shared vision,” asserts Katherine Allen, CIRD workshop co-host. The workshop, which included residents, artists, business owners and a director from the Community Redevelopment Agency, was successful in creating a shared voice and reenergizing cooperative action.

Thanks to this shared voice, Live Oak residents continue to work towards a vibrant and ever-changing hometown that maintains a distinct sense of place.