Bringing Life Back to Live Oak 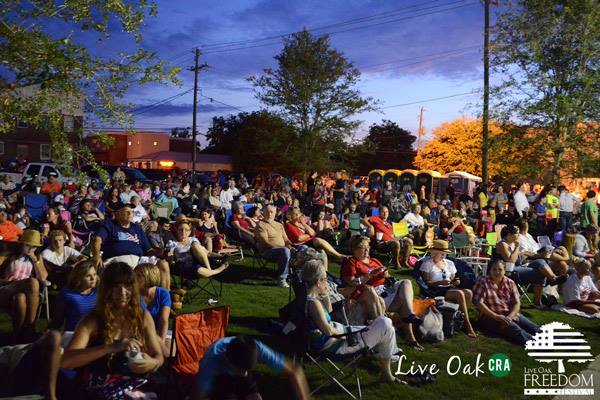 Live Oak, Florida is a small, rural town known for its beautiful live oak trees and proud and welcoming community. In early 2013, the University of Florida Institute of Food and Agricultural Sciences Suwannee County Extension spearheaded the effort to apply for a 2.5 day CIRD workshop to help the community consider how best to rebuild their downtown which had been devastated by Tropical Storm Debby in 2010. The team believed that with guidance from design professionals, they could bring life back to Live Oak, and that the workshop would be an opportunity to redesign and brand it.

Fast forward to the end of 2013. In November, we arrived in Live Oak to meet the community members, local government officials, entrepreneurs, residents, and artists who were all gathered in the historic passenger train depot for their rural design workshop.  The workshop was a very interactive experience; participants created their own models of their ideal Live Oak, worked with local artists to sketch logos for the town, and considered pedestrian and cyclist street improvements on a walking tour.

With the guidance of engaging speakers, such as James Rojas, founder of Place It!; Ed Barlow, Vice President of NorthStar Destination Strategies; Rick Hall, President of Hall Planning & Engineering Inc.; and Kennedy Smith, founder of Cluegroup; participants brainstormed and shared their creative ideas for long and short term improvements to the downtown. Representatives from local organizations such as the Community Redevelopment Agency (CRA), the Environmental and Brownfields Services, and the National Association of Realtors (NAR) played a key role in the workshop. This governmental and corporate presence illustrated the commitment of the whole community to making Live Oak a place where visitors want to explore and stay, and where residents could thrive.

The excitement for change and momentum around the future of Live Oak continued to build throughout the entire workshop. After presentations on Placemaking, community branding, and Main Street revitalization, participants discussed and jotted down ideas for downtown improvements in small group breakouts. The conversation continued as we ate great local food at Stoudemire’s, and viewed the photographs of Live Oak on display at the depot taken by town youth.

The workshop closed with an unveiling at Heritage Park and Gardens of all the great work that had been done over the course of two days. The newly designed logos were shared with the community who were engaged in interaction with the models and maps created during the workshop. We left the unveiling refreshed by the Florida sun, the friendly and dedicated townspeople, and confident that great work would continue to evolve.  We were thrilled to hear that the National Association of Realtors® awarded Live Oak with a $15,000 Smart Growth Grant to help fund workshop outcomes.  Only eight months later, we were impressed by how much work had been done to develop and improve Live Oak’s downtown.

During the workshop, Kennedy Smith recommended an assessment of downtown Live Oak's retail gaps and opportunities for revenue recapture. Since the workshop, they coordinated with the Small Business Development Center out of the University of North Florida to hire a consultant and place him in Live Oak’s Chamber of Commerce to assist in attracting and assisting new businesses. The brainstorming around branding and Placemaking at the workshop created five potential logos for the City Council to utilize.  In addition, the presentation by transportation expert, Rick Hall, and the walking tour he led, confirmed that making their streets more connected and walkable needed to be a priority. The city has continued to strategize ways to slow traffic in the downtown.

Since the workshop, Live Oak has already improved with programming, and the construction of projects to improve and connect the downtown that were beginning when we arrived are now either complete or well on their way: The Live Oak Heritage Trail, which connects the downtown with Heritage Park and Gardens is now complete, and sidewalks have been installed that connect it to the downtown.  A demolished building site in the downtown has filled with new grass and trees, and new street lights are also being planned for three miles along Route 129 from downtown Live Oak to I-10. New programs and events have made the downtown more vibrant: a Farmer’s Market now takes place there every Friday. The downtown of Live Oak, came alive with the July 4th Freedom Festival, a family friendly event that attracted approximately 3,000 people. Due to this great success, the town anticipates an even larger showing for the Jazz, Arts, and Blues Festival, currently scheduled for October 25, 2014.

Live Oak has also made a commitment to continuing the design education and momentum generated during the CIRD workshop. Over the last year, they have brought in multiple speakers and consultants to meet with town leaders and residents on topics such as downtown revitalization and economic development. Similarly, city officials have visited Community Redevelopment Authorities (CRA) in other towns, created and hired a full-time Director for their own CRA, and the county hired an Economic Development Director.

We are extremely inspired by how Live Oak took the tools, ideas and perspectives gathered at the CIRD workshop, and turned them into action and improvements. We are all the more excited to start planning our next round of workshops with our 2014-15 host communities.