The focus of the Spartanburg, S.C., Your Town, held September 13-15, was the design and re-use of abandoned big-box retailers and the development of design guidelines on commercial construction. 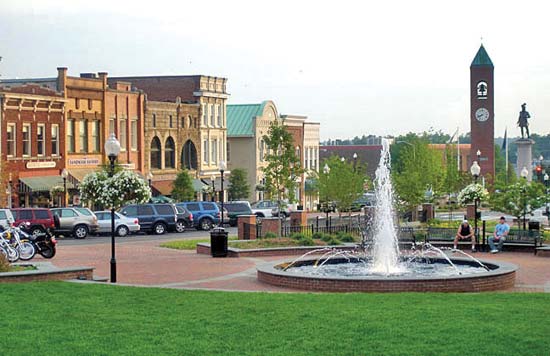 The focus of the Spartanburg, S.C., Your Town, held September 13-15, was the design and re-use of abandoned big-box retailers and the development of design guidelines on commercial construction. Spartanburg County in northwestern South Carolina has an unusually high number of abandoned big-box stores and chain retailers including Publix grocery stores and Wal-Mart. How to convert these huge structures surrounded by asphalt into new uses and how to make the commercial corridors of Spartanburg County more attractive were the issues tackled by the workshop.

Coordinated by Emily Neely with Upstate Forever, a nonprofit organization that promotes sensible growth and works to protect the upstate region of South Carolina, the workshop brought together a formidable group of presenters and over 40 committed local citizens. Pratt Cassity from the University of Georgia delivered the keynote address on the importance of good design. Steve Luoni, with the Arkansas Community Design Center, provided new designs for Wal-Mart stores and parking lots. Bill Steiner described the components of good places, emphasizing the importance of physical health and social interaction as an antidote to sprawl. And Jeff Speck, Director of Design at the National Endowment for the Arts, presented the New Urbanist alterntive to the throwaway landscape of sprawl.

Each of the small groups worked to redesign a specific abandoned big-box site at four different locations in Spartanburg County. Their proposals include mixeduse development, residential clusters, a children’s museum, and numerous beautification schemes. The participants agreed to continue to meet on a regular basis and work toward the development of commercial design the development of commerical design standards for the country.