Clean Sweep Frederiksted, a community economic development non-profit focused on Frederiksted’s historic district, is working closely with community members and the Virgin Islands Department of Planning and Natural Resources to reimagine the Frederiksted Fish Market. The May 4-6 CIRD workshop focused on design concepts for the market and offered a catalytic process that can lead to broad and inclusive economic development throughout the community, especially along town's historic district. 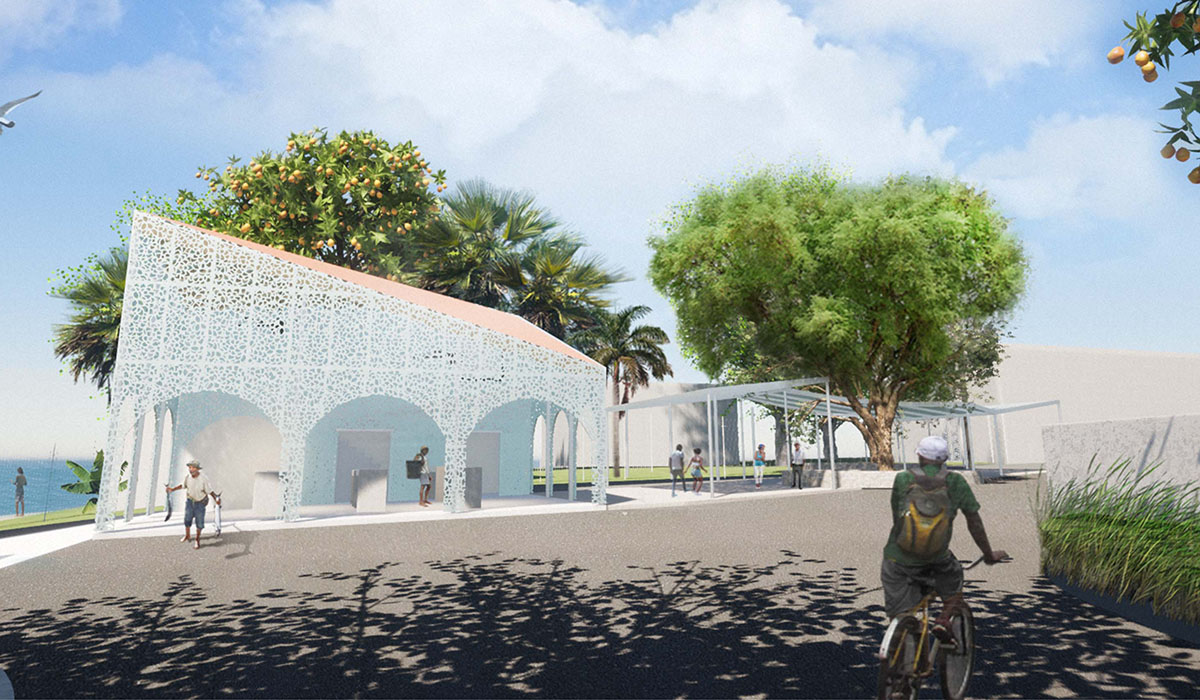 Rendering of the design concept for the Frederiksted Fish Market and adjacent public space, shaped by the workshop activities and numerous community engagement meetings.

At first glance Frederiksted’s workshop design challenge appears straightforward: design a fish market concept that meets the practical needs of local fishers while recognizing the historical significance of a gathering space that has been a focal point of the community’s deepest sorrows and greatest triumphs for generations.

But past efforts to revitalize places and boost Frederiksted’s economic prospects have often brought too little benefit to those who live in the historic town. Therefore, CIRD’s citizen-led design process took extra steps to account for local concerns rooted in disappointing past experiences. Equally important, CIRD’s process sought to build on Frederiksted’s record of resilience, dating back to an historic uprising of enslaved people in the mid-1800s and a woman-led plantation worker revolt in 1878, and  on through the community’s weathering of the sometimes-brutal forces of nature that continue to challenge the community’s prosperity. Recovery from Hurricane Maria (2017) has been slow, costly, and uneven, according to local officials. Housing remains unaffordable to many; unemployment rates are consistently high; and 68% of the town’s children live in poverty. Dilapidated buildings and crumbling infrastructure combine with still-standing architectural and historic gems to illustrate Frederiksted’s rich assets and deep challenges.

The CIRD workshop tapped the rapport that Clean Sweep Frederiksted (CSF) has built within the community for nearly a decade, as well as the partnerships that have been developed specifically around the fish market revitalization, most notably with Virgin Islands Department of Planning and Natural Resources, Fish and Wildlife Division (DPNR). Whether in working with the local fishers community, or with state and federal agencies charged with balancing competing demands, CSF’s mantra “Development without Displacement” underscores the inherent nuances of the workshop’s design challenge. CIRD’s process generated a spectrum of architectural preferences and community use priorities for the fish market and adjacent spaces, but there also was broad consensus that the fish market’s fate is a harbinger for broader community well-being.

Site visit: The CIRD team’s March 4 site visit allowed for direct conversations with the community. Whether meeting with elected officials including Congressional staff, chatting with fishers headed to sea, or joining public housing residents as they strolled beachside, common themes emerged from the interactions that reinforced messages from the virtual engagement, and added a layer of nuance to what community leaders had already shared.

Virtual kick off:  Highlights of a February 9, 2022, virtual kick- off meeting included CSF’s Virginia Clairmont providing opportunities for residents to share memories of the fish market, cognizant that such memories ought to help shape the market’s future iterations. During that meeting, themes that would recur throughout CIRD’s engagement emerged: safety matters; parking is important; listening to all voices is crucial; including youth and fishers throughout the process is important; and that engaging all sectors, whether they are able to attend formal meetings or not, is paramount.

CIRD Workshop—May 4-6, 2022: The workshop activities started with an evening community meeting that welcomed all stakeholders but especially engaged the local fishers. There was delicious food provided by Victoria House’s chef Kiki and good conversation and input that lasted several hours. Throughout the next day the CIRD team worked on design concepts and outreach, building on accumulated input and highlights from the previous evening. Omar Hakeem and Candace Maloney-Franklin from CIRD’s design partner TBD Studio, and local architect Luis Huerta focused on design drawings, while joined with NEA’s Courtney Spearman and HAC’s Natasha Moodie joined Virginia Clairmont at meetings with a variety of local stakeholders. Highlights included a team lunch with several engaged local elected officials, talking with DPNR staff about the value of public-private partnerships, and a visit to the local STEM high school where CSF has sponsored numerous colorful, large-scale murals to inspire the students. The workshop wrapped up on Friday with a public presentation of the design concepts. As the team stood before Frederiksted’s stakeholders - including elected officials, government agency leaders, business owners, nonprofit leaders, and community members - to share CIRD's preliminary design ideas, they emphasized that the listening process began months prior and would continue as the final design book took shape.

This massing presented a single story idea with two adjoining semi-covered plaza spaces that could support a mix of uses.

This massing showcased a two story concept with an open ground level market space and an enclosed second floor on raised pillars.

This massing illustrated a single level design with gates that could move to open or enclose the space depending on use or time of day.

When reflecting on the months-long engagement process, CIRD’s team emphasized the value of feedback from informal interactions, including chance encounters at the fish market and conversations with residents while patronizing a local business. CIRD’s team also took measures to directly hear from the fishers, cognizant that their voices were essential to the process but their schedules and access to technology don’t align well with a typical community engagement process.

CIRD’s community presentation at the workshop’s conclusion included a synthesis of challenges and opportunities as well as before and after renderings of a revamped fish market. Attendees were invited to weigh in on two fish market drawing options, with the input informing further development of concepts for CIRD’s design book.

Beyond CIRD’s design book, the most lasting outcomes are the relationships behind CIRD’s local engagement. Upon CIRD’s presentation of the design book, Clean Sweep Frederiksted’s Virginia Clairmont wrote:

Thank you for an incredible experience. It was a privilege to be selected to participate in the Design Workshop. I’ve learned so much in the past twelve months and enjoyed sharing our culture and love for Frederiksted with you. I am thrilled with the final design. It’s a unique and modern concept of the history and culture of Frederiksted. Most of all, it includes the “gingerbread” lattice I wanted! Thank you, again, for one of the most profound professional experiences in my life.

The CIRD team presented Clean Sweep Frederiksted and the broader community with a drawing package and design book that will serve as a guidepost for the project's next steps. The design book includes a summary of engagement activities, project and community history, and final design concept drawings along with recommendations from CIRD’s team for additional funding opportunities across the project’s phases. The Virgin Islands Department of Fish and Wildlife’s staff worked closely with CIRD and CSF throughout the process and has retained funding to proceed toward implementing a new fish market, in continued consultation with the community.

CSF will continue to engage with other communities in the CIRD Design Learning Cohort throughout 2022.  The cohort program offers additional access to CIRD’s technical assistance and peer learning with other rural community leaders. It also allows the ongoing work in Frederiksted to inform national rural design conversations.

Beyond CIRD, CSF and HAC are forging a long-term partnership. CSF is in early discussions with HAC’s Loan Fund and Training and Technical Assistance divisions, as affordable housing and bolstered local capacity are crucial to broader resident-led development efforts.

To learn more, read the CIRD story about the Frederiksted local design workshop.