The workshop was held about 20 miles from town at the Grand Targhee Ski Resort in the breathtaking Grand Teton Mountains. Doug Self, the Planning and Zoning Administrator in Driggs, gathered a terrific faculty and ran an organized workshop. 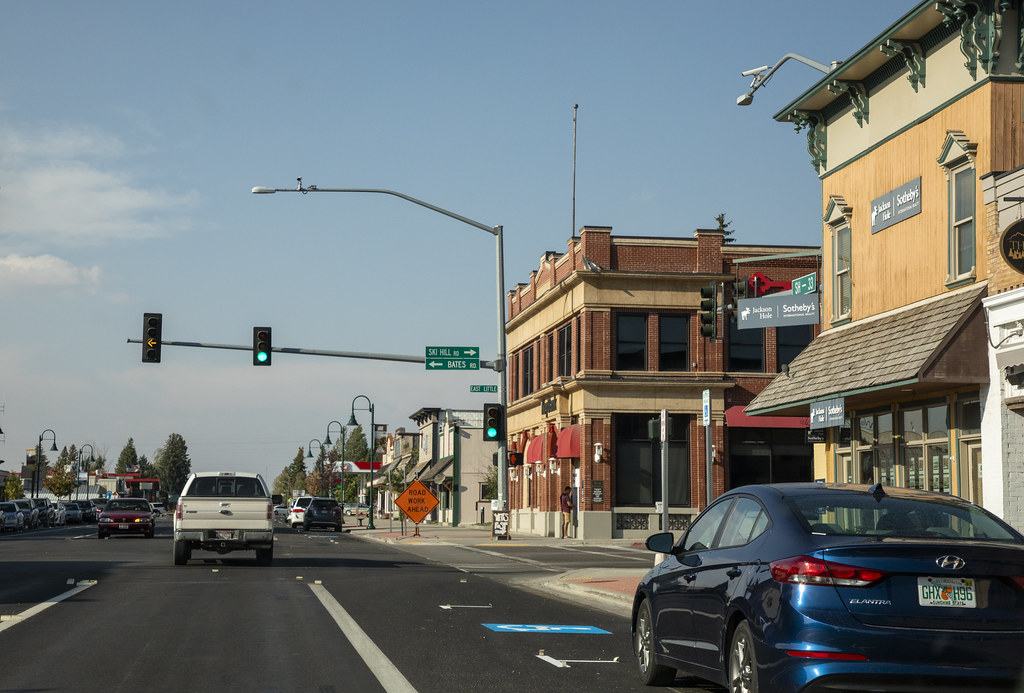 The City of Driggs, at altitude 6,200 feet, is home to approximately 1,300 people.  Expanding its role as a bedroom community for Jackson, Wyoming, and other resort towns, Driggs experienced a 74% growth rate between 1990 and 2000.

The workshop was held about 20 miles from town at the Grand Targhee Ski Resort in the breathtaking Grand Teton Mountains. Doug Self, the Planning and Zoning Administrator in Driggs, gathered a terrific faculty and ran an organized workshop. Ed McMahon gave an inspiring talk on the importance of design to quality of life. Some of the workshop problems focused on issues unique to the Mountain West and particularly to communities dependent on largely single-season resort economies. Jeff Speck, the new Director of Design for the Endowment, rolled up his sleeves and put his new urbanist background to work during a charrette exploring alternative designs for a new commercial development proposed on Main Street.

Doug Self wrote: "The Driggs Your Town Workshop imparted not only a new palette of ideas and design skills, but also a wave of positive and creative energy that has carried the community into several exciting new initiatives over the last four months.

Before the workshop was officially ended, the city had contracted with one of the core faculty members, Wendy McClure, Chair of the University of Idaho Architecture Department, to utilize a student team to address several design problems in downtown Driggs. During the workshop, Wendy had presented student design assistance as an economical method for developing conceptual designs and exploring alternatives. She told participants that 'student projects provide highly visual information in the form of digital and physical models and drawings that can help a community better visualize alternatives and potential outcomes.' This has certainly rung true for Driggs, as we now have several design alternatives for a new community center, including models, site plans, elevation drawings and floor plans, that have inspired community dialogue and involvement in the project.

Another initiative taken by the city is the creation of a Design Review Subcommittee to revise the city’s design standards and incorporate concepts related by design professionals during the workshop. Working closely with this subcommittee is a newly created Urban Renewal Agency, which will encourage development of vacant properties and restoration of historic buildings. The members of both entities were participants at the Your Town Workshop and are carrying ideas and principles from the workshop into their respective plans and projects.

The city has continued to cooperate with community groups such as Valley Advocates for Responsible Development and Teton Valley Trails and Pathways to bring in design experts, such as Dan Burden of Walkable Communities, to address street and streetscape design. The city has also pursued and been awarded a grant from the National Park Service Rivers and Trails Program to develop a Greenway Plan along Teton Creek, one of the common planning elements proposed by each workshop group."

Following the workshop, Driggs secured $3.5 million in preliminary funding from the Idaho Transportation Department to widen streets, add bike lanes, and generally improve the appearance of the its historic downtown in 2005. In 2006, Driggs was selected to receive planning and technical assistance from the EPA’s Smart Growth Implementation Assistance program. Finally, in 2012, the town received a $50,000 Our Town grant.