Douglas, Michigan, is a small town on the shores of Lake Michigan and Kalamazoo Lake, which is a widening of the Kalamazoo River before it flows into Lake Michigan. With a population of approximately 1,200, the village was originally established as two towns that joined in 1870 to form Douglas. 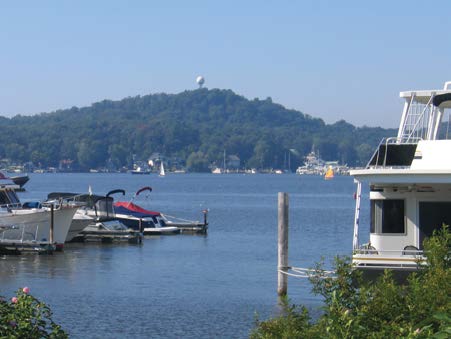 Douglas, Michigan, is a small town on the shores of Lake Michigan and Kalamazoo Lake, which is a widening of the Kalamazoo River before it flows into Lake Michigan. With a population of approximately 1,200, the village was originally established as two towns that joined in 1870 to form Douglas. The village retains buildings from the late 19th century as well as structures from the Arts and Crafts era. Today Douglas shares the role of resort community with Saugatuck, just across Kalamazoo Lake, and in 2009, the two were named one of America’s Dozen Distinctive Destinations by the National Trust for Historic Preservation. (Saugatuck’s Dunes, along Lake Michigan, are also among the National Trust’s 11 Most Endangered Historic Places because of development threats.)

Douglas is a quiet and lovely town, however the village is divided by the four-lane Blue Star Highway, has empty downtown lots that cry out for infill, and has waterfronts that are largely underdeveloped. The Douglas workshop was organized by Ryan Kilpatrick, Director of Community and Economic Development, who hired Dan Burden, Executive Director of the Walkable and Livable Communities Institute, to help coordinate the workshop. Its main focus was increasing the walkability of Douglas through traffic calming measures and pedestrian walkways, crosswalks, and trails. In addition, workshop participants examined the potential for waterfront revitalization and redevelopment.

Burden’s approach to Your Town was less structured than is typical; the design problems evolved from discussions among participants and an extensive walking tour of the village. The Mayor of Douglas, the city manager, and most of the planning commissioners and city council attended the workshop, as well as library staff, business leaders, gallery owners, and artists.  The group was very engaged in the design problems and discussion of Douglas’s planning issues.

Your Town: Douglas produced a series of proposals for walking and biking trails that link the village across the Blue Star Highway, roundabouts to calm traffic and lead visitors into downtown, and a boardwalk along the Kalamazoo River and Lake to tie the area’s natural resources to the heart of the village. Workshop participants formed an Advisory Committee that will meet regularly in order to refine and implement the design ideas.

In Fall of 2011, artists from Douglas and neighboring town Saugatuck paired up to create a large work comprised of 24 separate canvases depicting a scene on the Kalamazoo river. The work was entered in ArtPrize in Grand Rapids, MI.  This project addressed issues that had been raised in the town’s Your Town workshop, such as arts and economic development, as well as, improved relationships with neighboring communities.