The Whole Is Greater than the Sum of Its Parts: A Journey through Lancaster County’s Towns and Villages 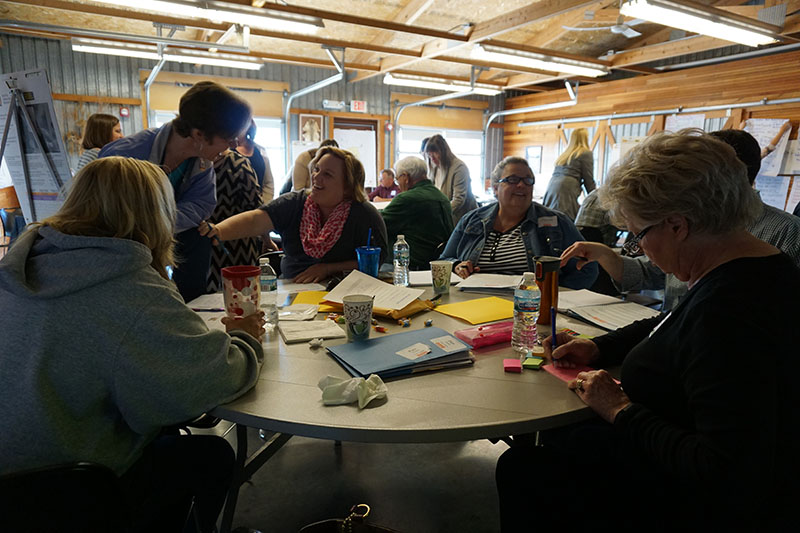 Within a stone’s throw of the state capital of Nebraska are the twelve incorporated towns and villages of Lancaster County. Their populations hover around a few hundred each, save for the 3,227 residents of Waverly. The proximity of these communities to Lincoln is both blessing and curse. The nearby schools, institutions, jobs, retail, restaurants, and cultural destinations are fantastic assets. Yet, the flip side is Lincoln dominates the majority of economic and cultural activity in the county. The towns of Lancaster County want to be seen as more than just bedroom communities. They want to provide a diverse set of experiences and services, both public and private. More than anything, they want their residents to have a sense of ownership and civic pride over their community. In this context, Citizens’ Institute on Rural Design ™, in partnership with the The Lincoln/Lancaster County Planning Department oversaw a two-and-a-half day workshop intended to create a toolbox of design techniques and resources to help the villages of Lancaster County recapture their sense of place. There is no single path for achieving these goals, but the folks of Lancaster County already had a better sense than most that it requires a mixture of services, programming, and amenities.

The workshop featured representation from the town of Bennet, Denton, Firth, Hallam, Hickman, Panama, and Waverly. There were over seventy participants in attendance including representation from U.S. Department of Agriculture, National Association of Realtors, University of Nebraska-Lincoln, and the Nebraska Arts Council.  The Lancaster County Board of Commissioners, as well as the Office of Congressman Jeff Fortenberry was also in attendance.  The workshop was led by a resource team featuring, Don Macke, Co-Founder and Director of the Entrepreneurial Communities; Ed McMahon, Senior Fellow for Sustainable Development, Urban Land Institute;  David Nelson, Project Associate, Project for Public Spaces; Cynthia Nikitin, Director, Citizens’ Institute on Rural Design™ (CIRD), Senior Vice President Project for Public Spaces; and  Milan Wall, Co-Director of the Heartland Center for Leadership Development.

The Urban Land Institute’s Ed McMahon kicked the workshop off with an inspiring evening presentation on what creates beloved, resilient communities, setting the tone for the entire event. Early the following morning the towns regrouped and began an intensive set of exercises including a Strengths, Opportunities, Aspirations, and Results (SOAR) conducted by University of Nebraska-Lincoln Extension Staff to determine Community Priorities. Participants learned about a host of topics covering community planning, public engagement, placemaking, economic development, and the grants and loans offered by the United States Department of Agriculture.

Peer communities from the southeastern corner of the state had an opportunity to share their success with similar approaches to improving quality of life. Nebraska City, the home of Arbor Day and Morton Salt, discussed its efforts to add cultural institutions, including signature museums and the Arbor Day Lodge. Ashland recounted how it navigated changing its public image to be a noted entrepreneurial hub with a vibrant main street. But the highlight of the entire workshop was a presentation by the community of Wilber. Wilber, Nebraska, the county seat of Saline County, is by act of Congress the Czech Capital of the USA. Doris Ourecky took the podium in traditional Czech folk attire and gave an animated and humor-laden history of Wilber’s massive Czech Days festival and its associated impact on the economic environment and milieu of the town. Thanks in no small part to the sale of kolaches, the traditional Czech pastry, and good beer, Czech Days give young people a tradition to feel a part of and expats  a reason to come home once a year. Even residents of the Czech Republic make a point of visiting this town of 1,855.

The event’s group work and lectures highlighted different strategies the towns could explore to benefit their communities. However, each individual municipality couldn’t possibly implement all of what they wanted given their limited resources. To address this, David Nelson, of Project for Public Spaces, spent time discussing strategies the towns could apply to work together to make one another stronger. David’s presentation encouraged collaboration and the formation of partnerships where towns could use their assets to complement one another, thereby forming a wider network of opportunity. The discussion led representatives of Panama to realize that they could share the cost of purchasing an inflatable screen, projector, and sound system for outdoor movies with one or more nearby communities. This way, communities would not only share in the expense, but stagger the use of the equipment and consequently visit each other’s downtowns for viewings.

The final day found the participants at the gorgeous pastoral landscape of the Spring Creek Prairie Audubon Center basked in light of a perfect spring day. Against this wonderful backdrop, the towns got down to business synthesizing everything they learned and discussed into clear and concise action items. Aspirations ranged from improving water quality, paving or repaving of streets, expanding housing opportunities, and adding amenities (splash pads, trails, community centers, gateways, recreation fields), as well as layering in programming through partnerships with schools, churches, and theatres. More than anything though, there was a clear sense that the towns were walking away with renewed vision and resolve, a confidence that things were going to get done and an understanding of how to prioritize between initiatives.

The Rewards of Laying a Strong Foundation:

What made this project such a success had a lot to do with planner Sara Hartzell and the rest of the Lincoln-Lancaster County Planning Department. As the applicants for this CIRD workshop, Sara and her team laid a strong foundation for the onsite work. Lancaster County planners traveled to each participating town multiple times conducting field reconnaissance, deliberating with decision makers, and generating initial ideas on improvements and programming. That field work, along with additional research, fed into 12 written community profiles that were utilized by the planning team prior to the workshop. The profiles informed the discussion during the workshop, allowing residents and staff to tackle the deeper and tougher issues, and avoid strictly informational questions pertaining to town resources and assets.

As an added bonus, the Lancaster County planners’ prudence and their partners’ generosity led to the workshop coming in under budget. Taking heed of Cynthia Nikitin’s, Director, Citizens’ Institute on Rural Design™ (CIRD) inspiring presentation on Lighter, Quicker, Cheaper (LQC) initiatives, the Planning Department, ended up with enough money to fund a demonstration for an LQC project in one (or perhaps more) communities this summer. LQC projects help show communities what the possibilities are for a space or event. They are not meant to be permanent, but they are durable enough to be left in place for a period of time. They get the community involved and give a clear picture of what the final product might be.

The Planning Department has issued a call for proposals to the participating communities of Lancaster County with the major requirement being that the demonstration implements one of the community priorities developed through the workshop.  The Lincoln-Lancaster County Planning Department has since selected proposals from the City of Hallam and Bennet for the implementation of LQC projects. Hallam’s proposal stands out in particular for its long range vision to use funding to improve the pedestrian streetscape of its downtown. Hallam hopes to capitalize off its resources, particularly their annual cultural festival, to beautify their downtown and bring new development to the central business district. Hallam’s project will provide their downtown with a new and unified theme, add landscaping, and improve the town’s open green spaces in the hope of filling Hallam’s vacant lots with new business. The Lincoln-Lancaster County Planning Department will work closely with the chosen community to develop a project that meets goals and stays within the budget. They will also provide the expertise to design it, and work to find possible participants and supporters who might help implement the project.