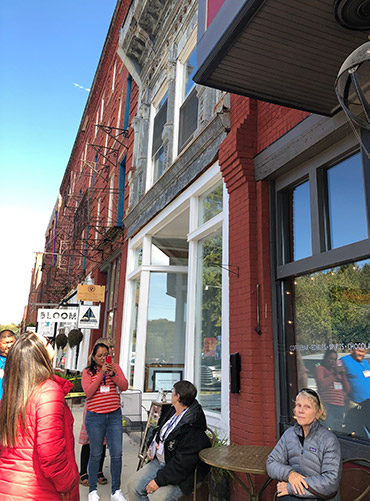 As a teen, I was fortunate to spend a lot of time in West Virginia’s Canaan Valley, camping and hiking in Blackwater Falls State Park and the Dolly Sods Wilderness. A mere three-hour drive from my home in the suburbs of Pittsburgh took me to a place of stunning mountains, river valleys, and waterfalls, where I connected with the outdoors and became well-acquainted with the natural beauty of the area. Little did I know I’d return decades later to acquire tools to support my creative placemaking work in rural Maine.

This time, instead hiking boots and other gear, I packed my laptop and a willingness to learn as much as I could at the first-ever Learning Cohort Summit of the Citizen’s Institute on Rural Design™ (CIRD). I would spend three days connecting with individuals working tirelessly to engage in rural design and creative placemaking to improve quality of life and economic viability for their communities.

I now call Maine home and work as a writer and consultant. For the past year or so, I’ve been working with an outstanding organization in Central Maine, Snow Pond Center for the Arts. Snow Pond began in the 1930s as a music camp, always working to provide a balance in social and recreational activities, education, and excellence in performing and teaching of arts, while earning an international reputation and hosting generations of campers.

In recent years, Snow Pond has expanded dramatically by serving as a community center and providing year-round programming that’s accessible to all. Snow Pond has an enhanced mission of improving quality of life for residents in the Belgrade Lakes Region of Central Maine, while leading efforts to cultivate sustainable prosperity through creative placemaking in which all community sectors partner to strategically shape the character of a place around arts and cultural activities. To engage in these efforts more robustly, Snow Pond applied and was accepted to CIRD’s new peer learning cohort, composed of 23 communities from different parts of the US.

I traveled to the Summit with Snow Pond Executive Director John Wiggin, the visionary behind creative placemaking efforts in the Belgrade Lakes. Arriving in town early gave us the chance to take a quick drive around Elkins. On every corner we saw evidence of creative placemaking, from the Elkins Depot Welcome Center to the Arts Center on Park Street, a former church where the Randolph County Community Arts Council is based.

That night, we joined CIRD leadership and other Cohort participants for a reception and dinner at the Graceland Inn, a National Historic Landmark circa 1892. It featured rooms filled with intricately carved, native hardwood furnishings and offered stunning views of the surrounding mountains. It struck me as the perfect setting to begin the Summit, because so many community development efforts involve preservation of historic buildings and districts, as well as deep ties to the landscape and natural setting.

From the moment I set foot in the Graceland Inn, I felt the power of connection and a growing sense of community. Everyone was eager to introduce themselves, share information about their projects, and draw parallels among challenges and goals.

I must admit I was a bit confounded by the concept of rural design. I’ve always thought of design in literal terms, such as buildings designed by architects or machinery designed by engineers. Thanks to that evening’s introductory presentation, I was encouraged to consider the “experience” of design and to view it as a means for driving economic, physical, and social change in a community. I learned that rural design involves many aspects of communities—education, employment, health, housing, transportation, and more—and that rural design strategies help communities address the challenges they face. This new way of thinking about rural design was a meaningful foundation for the rest of the Summit.

The next morning, our van buzzed with conversation during the hour-long drive through the mountains to Thomas. Time passed quickly as I chatted with Stephen Sugg from the Housing Assistance Council. He provided invaluable guidance about connections to make at the Summit—and back home in Maine.

In particular, Stephen recommended speaking with Jeff Hawkins and Dessie Bowling of the Kentucky Valley Educational Cooperative (KVEC). One of Snow Pond’s primary goals is to transform education in Central Maine, and participating in the Cohort with Jeff and Dessie, whose educational innovations have gained attention from Bill Gates and Mark Zuckerberg, will serve as an incomparable touchstone.

Stephen also shared information about a leader in rural education at the University of Maine I hadn’t heard of, one of several new connections in Maine I would make at the Summit. Becoming aware of people—near and far—who are on this journey is very energizing and helps perpetuate momentum, especially given the lulls and setbacks that are an inevitable part of community and economic development.

It was no accident that the Summit took place in Elkins and Thomas, both known for their arts orientation and revitalization. After a morning of immersive presentations on rural design strategies, the Cohort spent the afternoon touring downtown Thomas by going from storefront to storefront along East Avenue and hearing directly from the (mostly young) creative entrepreneurs who have chosen to live and create businesses there. They made a number of the differences and similarities between Thomas and Snow Pond apparent.

Unlike Thomas, Snow Pond is the quintessential Maine camp setting, a la “On Golden Pond,” in the Belgrade Lakes, a bucolic area of four towns and seven lakes in the midst of more than 100 square miles of scenic farmland and wilderness. In the midst of all this, Snow Pond boasts a pristine lakeside setting with cabins and lodges, stately pines, and one of the largest outdoor amphitheaters in the US.

Yet Snow Pond also needs creative entrepreneurs. As in many rural parts of the US, talent attraction and retention are critical issues in the Belgrade Lakes. Developing Snow Pond as a community center and promoting the Belgrade Lakes will attract creative entrepreneurs, educators, and other professionals, who will want to work and live in a place with a vibrant arts scene. This in turn will create positive change in the community and economy.

Thomas’ creative entrepreneurs have already established antique shops, galleries, restaurants, and more. Some grew up in the area and others came from as far away as the West Coast, including those actively recruited by other artists to be part of the community. They attribute their successes to hard work and lots of cooperation and support of one another. Many are active in local government. They’re creating a place where people connect, which I learned is one key to successful rural design. Their stories provide important clues to how Snow Pond can advance creative placemaking.

Now that I’m back in Maine, I’m energized by my connections with design, economic development, and creative placemaking experts, who will continue to serve as resources for Snow Pond. I’m especially grateful for having formed new relationships with those from other rural projects across the country who are involved in similar efforts and who will be there to serve as a sounding board and a forum for sharing ideas. The truly exciting part is that there’s so much more to come as the year-long Cohort progresses.