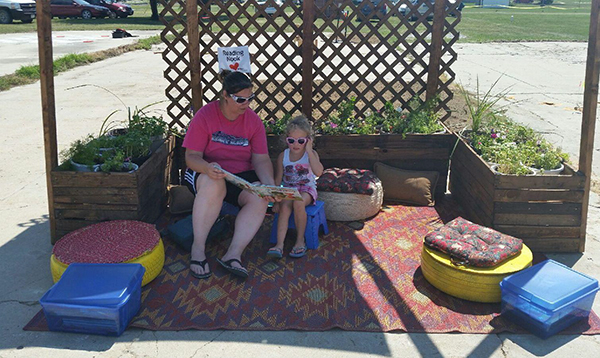 LQC projects are short-term, low-cost pilots that let communities experiment with different possibilities for a space without having to incur the high cost of a major development project. While LQC projects are not permanent, they are designed to be durable enough to be left in place for a period of time. Most importantly, LQC projects brings the community together to reimagine a space, and can show the community what a more permanent change may look like.

Representatives from Hallam wanted to revitalize the village’s Main Street. Their goal was to give downtown a more unified theme and improve the pedestrian experience. LQC was a unique opportunity to test their plans in anticipation of Hallamfest, the village’s annual cultural festival that brings people to downtown Hallam.  To accomplish their goal, Hallam added curb extensions at the primary main street intersection. The curb extension was implemented to calm traffic and beautify the street. Straw wattles were used to create a temporary curb, mulch was added in the space between the curb, and new planters were donated and placed by Hallam volunteers.

‍
The town also developed temporary public spaces like the ‘reading nook,’ which provided visitors with shade and a chance, to sit, socialize, and read a book. Books were donated by the local library, and seating was decorated and made from used tires by local residents.

The reading nook, in downtown Hallam.To unify downtown, Hallam branded its motto, “The Little Town with a Big Heart” onto Main Street. Volunteers decorated Main Street’s primary intersection with painted red hearts. The city also added benches along Main Street that were made with 4x4s and concrete blocks and were decorated with red hearts.  Decorative banners, featuring the town motto, were purchased and placed along Main Street.  The branding upgrades helped cultivate a greater sense of ownership and identity for Hallam’s downtown.

Bennet’s LQC project focused on improving Village Park during the town’s annual Ice Cream Social. Bennet used the opportunity to test the site and design of a new splash pad that the city had been raising funds for. The temporary splash pad was created by drilling holes in a PVC pipe. Volunteers added signage, “Splash Pad, Bennet Village Park”, and spray painted walkways directing visitors to the site. The splash pad was a big hit with kids during the festival!

The festival also united the town in a series of cultural activities including an art display, and a film screening. Large paper “B’s for Bennet were given to families to decorate, and were later displayed as public art. The B’s were then distributed to local businesses to showcase in downtown Bennet. Public art also included ‘tree quilts’ that were sewn together and wrapped around several trees by local volunteers.

The festival was capped off with an outdoor movie that played in the park. Rigid foam panels were secured together to create a screen, and audio/visual equipment was borrowed.  Residents brought their own chairs, and enjoyed donated popcorn.

Overall, both Hallam and Bennet successfully implemented their respective Lighter, Quicker, Cheaper projects. Hallam gave preference to pedestrians through a curb extension, and gave citizens a greater sense of ownership of Main Street through a successful branding campaign. Bennet used LQC to experiment with improvements to its park before making long term investments. The splash pad was a rousing success and offered visitors a chance to imagine what their park could look like in the future. Amazingly, both communities spent a total $3,532 (about $1,766 for each community) on both workshops, thereby showing us that a little money can go a long way. Beyond the low-cost of the implementation, what makes the work in Hallam and Bennet truly impressive was that the LQC efforts were intergenerational; bringing the entire community together to celebrate their hometown and plan for its future. Such low-cost, do-it-yourself capacity building work is replicable, and can be an effective tool to help transform your community.

*All Images courtesy of City of Lincoln, Nebraska Planning Department