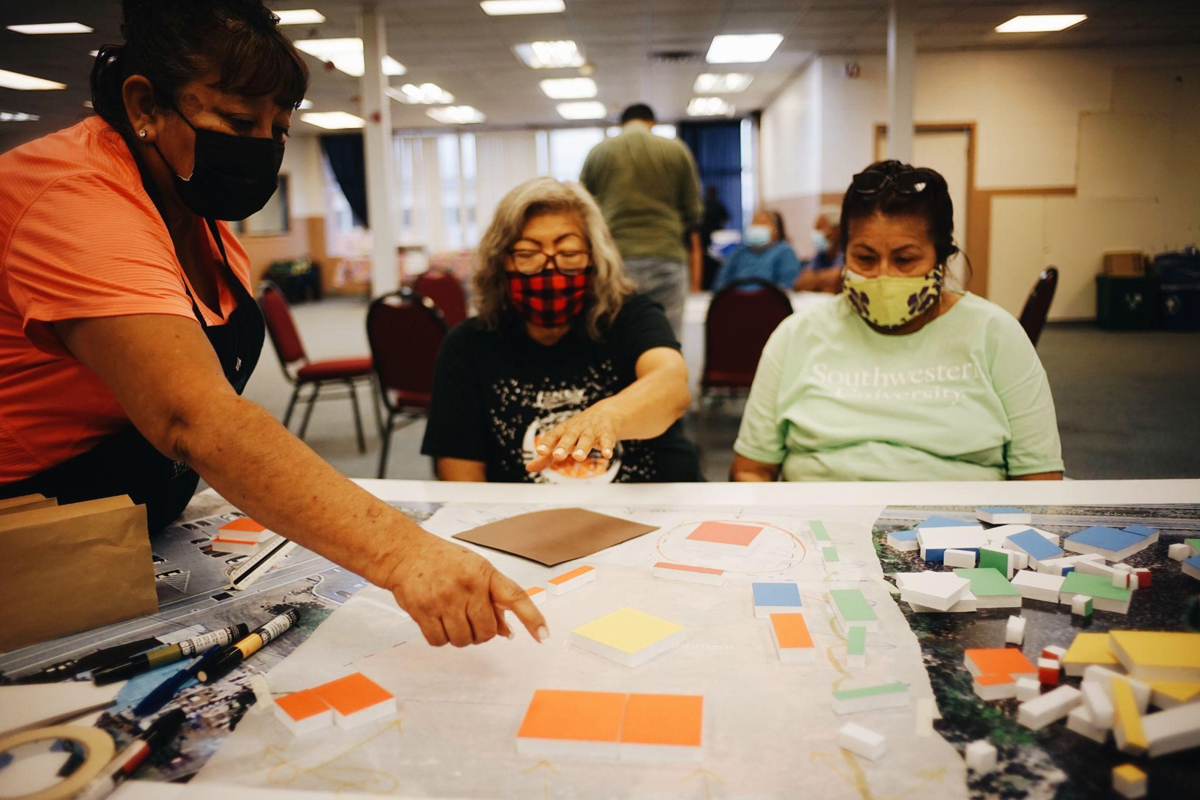 Dominic Poncho, a musician from the Pueblo of Laguna, describes his hometown as “where the roadrunners come to play.” Located on the banks of the Rio San José in what is now northwest New Mexico, the Pueblo has been inhabited since time immemorial. For decades, a stretch of historic Route 66 has served as the Pueblo’s Main Street, a gathering place for both people and businesses.

In 2018, the Pueblo identified a need to revitalize this Main Street. As Elroy Keetso (Navajo), a planner for the Pueblo, explained, the vision was for the area to be a communal space and a hub of commerce and tourism, all united by architecture that felt rooted in the Pueblo’s long tribal history.

Inspired by the Pueblo of Zuni’s Main Street revitalization project just 100 miles away, the Pueblo of Laguna applied to the Citizens’ Institute on Rural Design (CIRD) to host a local design workshop. The workshop’s design challenge was to develop a preliminary plan for an 80,000 square foot vendor market space which would be an anchor on Main Street and a catalytic project for revitalization, reflective of Pueblo cultural values.

The workshop was originally scheduled to take place in May 2020. Due to the pandemic, it was postponed until August 10-13, 2021. But work continued during the year-long delay, as the Pueblo hosted virtual input sessions with people from across the community. One upside to these virtual sessions was that they took place in families’ kitchens and living rooms, allowing Pueblo planners to hear from multiple generations of residents and generate more community engagement than traditional planning meetings.

On August 10, 2021, after a year of delays, the four-day Pueblo of Laguna Main Street CIRD workshop began! It took the form of a design charrette involving community members throughout the process by inviting them to give feedback on the design as it evolved. These community members didn’t just listen to a presentation at the end of the process—their feedback guided the design team as they iterated on the design.

To protect against spreading COVID, the workshop followed strict health protocols.The Pueblo required all participants to be fully vaccinated, and masks were required at all times.

The workshop began with a site visit so the design team could better understand the challenges and opportunities of the place they hoped to transform into a hub of community activity.

The first community meeting focused on engaging residents with technical expertise in planning, infrastructure, engineering, and related fields. This helped the design team leverage the community’s own expertise for some of the more technical aspects of the design—from pervious surface calculations to what type of shading the project should include. Next, the community meetings shifted to include families who had been a part of the virtual focus groups. The design team sought their perspectives on the goals and challenges before them.

Days two and three of the workshop featured site modeling events. Community members were given a large printout of the site along with cutouts of various elements the final project would include, from vendor areas to restrooms. They were then asked to lay out the space as they hoped it would look. This exercise gave the design team invaluable insight into the communities’ priorities and preferences and also helped participants “start to feel like they were inhabiting the space,” according to design coordinator Zain Islam-Hashmi.

While some community members were modeling the site, the Pueblo was also hosting a pop-up market on the site itself. This allowed local artists and craftspeople to experience the site in a new way and also helped the design team see how elements of the design might work in the real world.

Through these community meetings, the design team learned from the feedback they received and advanced the design work to better match the community members’ vision. The workshop culminated in a public presentation on Friday at the Pueblo’s K’awaika Community Center.

Outcomes and Next Steps

Throughout the workshop, the design team sought answers to a question Islam-Hashmi phrased as “what principles does the community look to uphold in their common spaces?” It was clear that residents and tribal members valued this project as an opportunity to build a gathering space for the community. So, the design includes a visitor center and green space that encourages community members to gather.

Community feedback helped the design to combine the traditional and the modern. The local input offered dozens of ideas, including material choices, cultural and tribal symbology, honoring the four cardinal directions, and even the shape of the gathering space. One of the proposed design ideas incorporated a circular, open-air amphitheater, embracing connection to the sky above.

The design team was also moved by the community’s excitement for including elements to honor the Pueblo’s veterans. The design quickly came to include memorials for those who have fought for the Pueblo as part of the United States military and as warriors long before European colonization.

Over the next several weeks, the design team will be finalizing design ideas and drawings of the proposed vendor market and collating the work from the workshop into a design documentation book. The document will be a useful tool for the Pueblo to seek further funding and grants for more detailed design development and construction. But CIRD’s involvement doesn’t end with the completed design book or with our final presentation at the community center. We’ll be staying involved to help the Pueblo make the Main Street revitalization a reality.

Planner Elroy Keetso explained that people often equate completion with a built structure, which is what makes it so important to “celebrate the victory” that is a completed design concept. The design ideas developed by the entire community are absolutely a victory worth celebrating. Congratulations, Pueblo of Laguna, on a successful workshop!