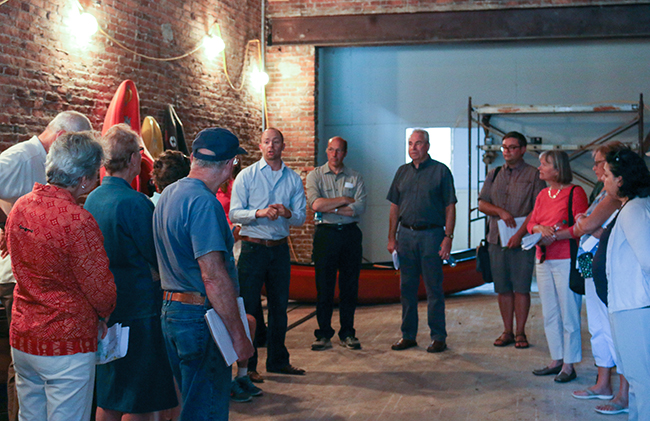 On a recent overcast spring day in Franklin, New Hampshire, Concord Monitor journalist Elodie Reed visited retired teacher and new business owner George Mansfield as he sat outside his bookstore. Mansfield recently closed his bookstore in Tilton, NH and opted to set up shop in Franklin instead. Surveying Central Street, he said, “I think it’s starting on an upward trend, downtown here especially.”

Mansfield isn’t the only resident to notice the positive changes that have been sweeping the small, 8,000 person town of Franklin. In June, citizens gathered for a walking tour to celebrate one year of momentum and engagement, following the Citizens’ Institute on Rural Design™ Franklin for a Lifetime workshop. Last year’s convening at the workshop brought Franklin to a shared vision: a town that is a welcoming and supportive place for people of all ages. Key action items Franklin for a Lifetime project outlined were: create affordable and accessible housing for all ages, create more quality public spaces, clean up the riverfront, coordinate downtown improvement, and encourage new, diverse businesses to open.

Since then, five action groups (volunteerism, recreation and community events, arts and culture, marketing, and housing and economic development) have met through the course of the year to implement ideas and projects generated by the workshop.

The results of these coordinated community efforts are astounding. An impressive twenty-eight participants from the workshop reported new leadership roles and opportunities undertaken in Franklin. More than $82,000 of grants and resources have been leveraged by the community, including $50,000 from USDA Rural Development’s Rural Business Development Grant (RBDG) Program.

So far, three new businesses have already been created, and two existing businesses are currently expanding into larger spaces.  A new outdoor outfitter is restoring unused space in a historic building to open as retail space. The store will sell rafts, kayaks, bikes and other outdoor equipment, and will also offer guided tours, to take advantage of Franklin’s rivers and existing bike and walking trails. A new bookstore and an art gallery and music venue, Toad Hall, recently opened their doors-- both on Central Street. Moreover, a co-working space and restaurant-microbrewery are in the works.

The 5 action groups have created a community newsletter, facilitated citizen-led volunteer projects to enhance the city and collaborated with property owners and developers to expand downtown housing options and repurpose boarded-up mill buildings.

One such housing project, part of a separate initiative led by non-for-profit Concord Area Trust for Community Housing (CATCH) and slated for the Riverbend Mill building, is finalizing its funding, and will include 45 units of affordable housing. This housing development located along the river will also include a playground, green space and art studios. Moreover, the addition of affordable units will expand housing options for the aging population in Franklin.

The newly cleaned riverfront in Franklin. Often called the “the three rivers town”, as it sits on the confluence of the Pemigewasset and Winnepesaukee Rivers, and the headwaters of the Merrimack River, Franklin is rediscovering and activating these strong community assets.