Designing for an Economy of Neighborliness 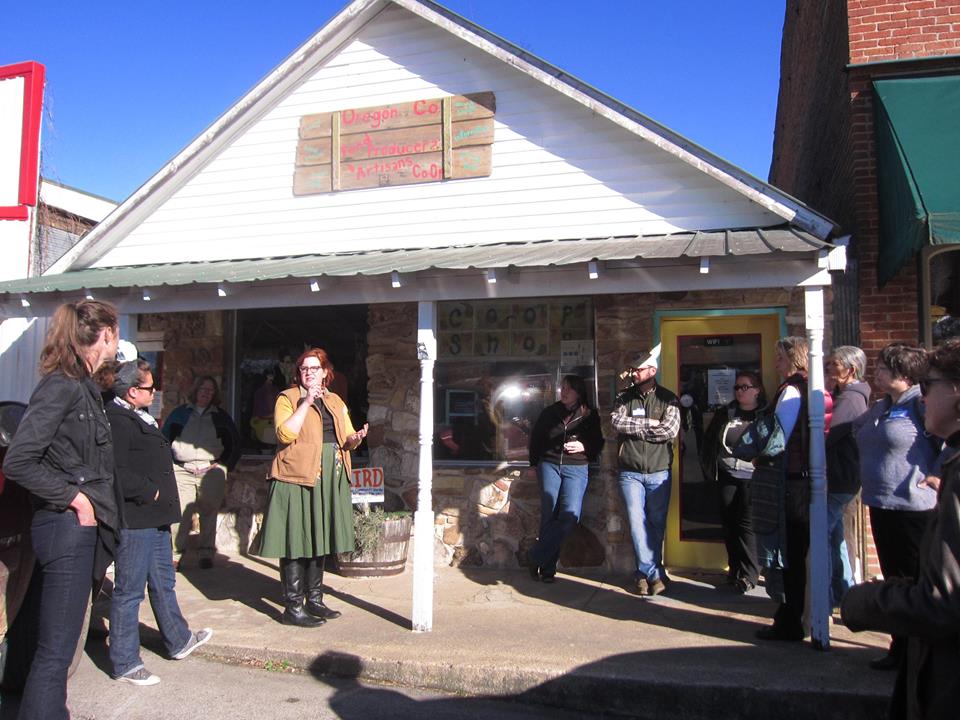 This past November, the all-volunteer Oregon Country Food Producers and Artisans Co-Op of Alton, Missouri hosted a two and a half day Citizens’ Institute on Rural Design™ (CIRD) workshop. The Co-Op applied for the CIRD award in May of 2014 with a vision to create a design for the Co-Op’s expansion into a vacant building facing the town square with the community’s input into how it would best serve the needs of both the community and the region.

About a year and half ago, Rachel Luster founded the Co-Op based on what inspired her about Oregon County: its “economy of neighborliness;” the area’s tradition of buying, selling and trading handmade and homegrown goods (Luster told us she would trade fiddle lessons for local beef!). The Food Producers and Artisan Co-Op has truly centralized these exchanges of goods and talent into one space, which now needs a bigger space to house the Co-Op’s growing offering of products and services, increased membership, and expanded programs.

The unique culture of the region played an integral role throughout the workshop: from the kick off presentation on the Ozarks’ vernacular architecture, to the live folk and country music that closed each day. Local and homemade food was served at every meal, and many design proposals were put forth for the new Co-Op and surrounding area.  As CIRD’s Director, Cynthia Nikitin stated, “We want to come up with a design that is authentic to the community, and look at what’s inherent in the culture.”

Before brainstorming proposed designs for the Co-Op’s new space, participants learned about creative design projects that have been successful in other rural communities via presentations by the Resource Team.  Kirsten Stoltz, Programming Director of M12 Studio, shared some of the innovative projects that she has been involved in, including a unique root cellar and an open-air classroom in Sweden. Landscape architects, Jesse and Emily Vogler, from the University of Washington in St. Louis, and Rhode Island School of Architecture, shared inventive designs for community gardens and mobile farm units.  Maria Sykes, founder of Epicenter, presented on how they created an inclusive community space for a town of roughly 800 people, and on the art and design programs they created to engage and educate youth in the community—which the Co-Op is interested in doing as well.

The workshop then got down to business when Co-Op Consultant Ben Sandel, from CDS Consulting Co-Op, presented on how the Co-Op could create a sustainable plan for the Co-Op’s expansion by creating analyses of their leadership, resources, and system-- which he created the next day in collaboration with the Co-Op’s financial team.  Click here to view the full agenda.

In breakout sessions, the Resource Team asked participants about the community’s values and challenges. Participants included – in addition of course, to the Co-Op’s members: local business owners and residents, representatives from their local Extension office, HeadStart, the Mid America Arts Alliance, USDA Rural Development, and from cooperatives from nearby Counties.  The important values of the County were, not surprisingly, neighborliness and self production, and their greatest challenges were engaging youth, a lack of public spaces, communication, and funding. Participants listed ideas for the Co-Op’s new space: a kiosk, community kitchen, gallery, store, restaurant, classroom, and orchard—which participants learned about the potential for in a presentation by Guy Ames, an orchard specialist at ATTRA, on what could be grown organically in the Ozarks, and possibly in a small community orchard in their town square.

With the findings from the sessions in mind, the Resource Team's designs were creative and reflective of the community. They included: a rooftop garden, super-sized commercial kitchen and communal table/ work station, a green house, an orchard, and a root cellar. Kirsten Stoltz also put together potential programming and operating plans for the Co-Op as both a nonprofit and for profit, as well as a list of the Co-Op’s potential assets, resources, partnerships, and projects that would allow it to make the greatest impact on the community.

The plans and designs were then unveiled at an open house, which was really a great community celebration— with great local country music, the Co-Op members’ award winning chili, and local home-made ice cream!

CIRD looks forward to seeing how the Co-Op grows and builds upon the designs, guidance, and feedback from the workshop to become an even greater asset to Oregon County. The CIRD team hopes to return to Alton to again experience the unique culture and strong sense of community and creativity. Their dedication to making a truly great place is a notable model for other Co-Ops and communities in the great Ozarks, and across the country.