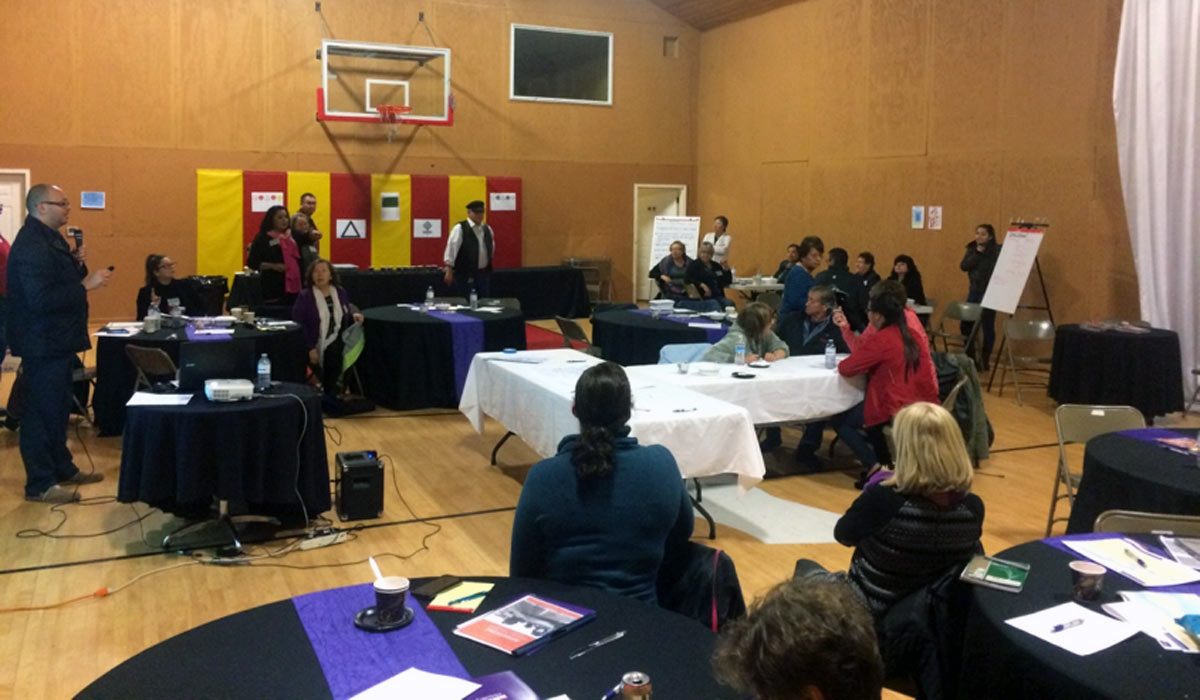 The workshop has led to several exciting projects and new funding opportunities. The CIRD workshop process helped the community secure $2 million dollars of federal funding through the the U.S. Department of Health and Human Services’ (HHS) Administration for Native Americans (ANA) Sustainable Employment and Economic Development Strategies Program (SEEDS). With ANA funding, the community was able to create three new positions who will be assisting with the Akwesasne Strategic Action Plan. Additionally, Akwesasne has also initiated its plans to enhance public space amenities. The First Nation demolished the Hogansburg-Akwesasne Volunteer Fire Department’s station in Hogansburg, NY to make way for a new green space complete with picnic tables and benches. The demolition is part of a multi-year plan to transform Akwesasne into a cultural destination for people interested in learning more about Mohawk’s rich history and heritage.

We interviewed the CIRD workshop coordinators to learn more about how the CIRD process impacted the community and about the new planning developments that have transpired since the workshop’s conclusion.

1.  What have you learned from the CIRD process, and how will these lessons inform your work with the tourism plan?*

We have been working a lot on improving our community engagement strategy and CIRD has reinforced our work in a positive way. We had more people come out to the workshop who didn’t know what we were working on, and a wider range of people were engaged--beyond the scope of what groups we were able to engage before.

The CIRD process helped in understanding how to broach some of the harder topics and provide an avenue to talk about them. The “Beautify Akwesasne” project started parallel to planning for CIRD; the project took applications from community members who had supplies for sprucing up their property – and the program provided them with free labor. The Beautify team hired several community members who learned job skills and helped to clear brush, paint, and do small repairs to properties throughout the community. The workshop provided added perspective to ongoing projects, like Beautify Akwesasne, and brought attention to community assets that were previously overlooked. More importantly, the process provided much needed feedback related to what the community wanted to see as far as murals, art, and culture. This work helped with our Beautify effort and our cultural tourism initiative.

The traditional and locally sourced food we served at the CIRD workshop was also a key element that people enjoyed and it sparked new ideas. Since the conclusion of the workshop, there have been several other events and activities in the community that have been tying history and culture to food.

2. What projects are underway that were informed by the CIRD workshop?

The Cultural Ambassador program blossomed from the CIRD Workshop and is in development. The program is related to the cultural tourism initiative and will train several community members to lead tours and cultivate new tourism-based-businesses.

The program will help Cultural Ambassadors learn tribal history, culture, and relevant job skills. Some will be given job placements as paid interns.

The three new ANA funded positions who will be assisting with the Akwesasne Strategic Action Plan are:

The Tourism Incubator Manager will initially supervise the planning and establishment of the Tourism Business Incubator, once operational, the manager will build and assist in the success of new and existing small businesses focusing on the tourism sector.

This position will provide oversight to the community engagement, planning, proposal/grants writing processes. This position will also work on the re-development of the power dam site and overall capital and infrastructure project developments for the Heritage Complex and Art Park.

The Akwesasne team also mentioned a series of projects and accomplishments:

*The interview was edited to for length and clarity.

Overall, the Akwesasne CIRD workshop was an important event, which provided a forum for the community to discuss its future and receive guidance from a resource team of professionals. The resource team helped Akwesasne think about how they may capitalize on their community assets, dedicate funding to cultural tourism training, and develop guidelines that integrate Akwesasne Mohawk culture into their signage. The workshop also broadened the scope of community engagement in Akwesasne and opened up conversation with the community members typically absent from planning the process. Lastly, the workshop helped the community articulate their values and needs more effectively to state agencies like the NYSDOT. Now new transportation initiatives will be make a concerted effort be more context sensitive and culturally relevant to Akwesasne.