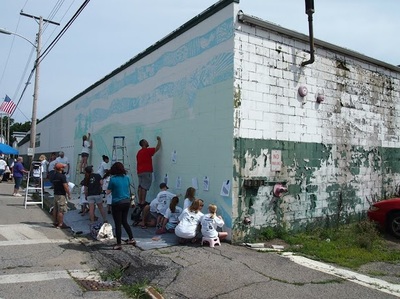 In our July eblast, we sent out a request for stories of rural communities overcoming their declining downtowns, and the responses we received illustrated the amazing and diverse ways small towns across America are being brought back to life.  We found that introducing new arts opportunities and programming was a common catalyst for reviving downtowns and economies—as was restoring trails, streets, and vacant buildings.  Serena Galleshaw, the Sustainability Coordinator of the Berwick Downtown Vision Committee, wrote to us about their great effort to revive Berwick, Maine that has incorporated all of these strategies, and was driven by a great community-wide visioning.

Berwick, ME, which has a population of 7,246, was home to Prime Tanning, one of New England’s premier leather tanneries, which left 11 acres of the center of downtown vacant when it closed five years ago. In response, the Downtown Vision Committee (DVC) has been leading a broad public visioning of the downtown to see how to turn the vacancy into opportunity, and to gather feedback and ideas from community members on how to revitalize their downtown.  The DVC reached out to many different sectors of the community, and eventually thousands of community members, through hosting design charrettes, canvassing the town, presenting at schools, libraries; and to different integral community groups by building a social media campaign.  As Ms. Galleshaw stated, “All of this hard work and excitement has brought so many people out of the woodwork to join projects that we had to create subcommittees—Riverfront, Trails, Events, Sustainability, Economic Development, and Preservation & Heritage—to provide outlets and organization for people to do real work in the town.”

So what was the real work? The trails committee worked with an Eagle Scout to build a 1.2 mile trail through public land that will connect the downtown to the library through an old historic site called Penny Pond, the riverfront committee has acquired land to build a boat launch, and the sustainability committee  built and hosted Berwick's first ever Winter Farmers Markets, with 400+ people in attendance.

In addition, through the visioning process, the DVC realized the importance of art to the community, and the potential for it to improve Berwick.  This led to the creation of a network of local artists, and the development of the Berwick Art Association (BAA), which as they say, is an “artist collaboration” that “supports and beautifies” their communities through their events, dialogues, and work with schools and local nonprofits.  They also implemented the Berwick Community Mural, a façade on Prime Tanning itself, which people from the community, along with artists came together to paint. Ms. Galleshaw stated, created “a visual and physical experience that bridges the gap between unused industrial space and development in the future.”

What began as a visioning process for the vacated Prime Tanning space, led to a revitalization effort of the whole downtown—with improvements in the town’s trails, riverfront, arts and programming— that all reflected the ideas and needs of the whole community.  The community’s input has been compiled in Berwick’s Vision Report, and will be included in their Comprehensive Plan, and a committee has been created— Envision Berwick—to make sure that the transformation of the Prime Tanning lot will reflect it.

Berwick, Maine is an exceptional case study and proves that, with the input and hard work of a community, the revitalization of a vacant space can lead to the rebirth of a vibrant and historic downtown.