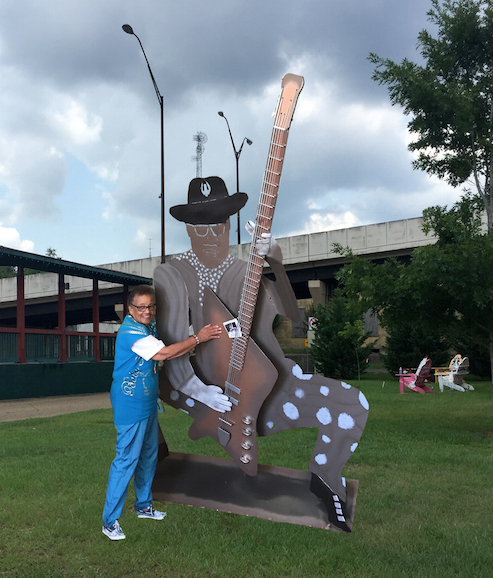 Calvin Phelps invited Citizens’ Institute on Rural Design (CIRD) staff to spend a night in a McComb, Mississippi jail. He claimed it would be a step toward understanding how CIRD’s 23 Learning Cohort communities are enhancing the quality of life and economic vitality of rural places via planning, design, and creative placemaking. When CIRD staff spoke with him, Phelps was convincing and conversations with him were rapid-fire.  His vision for a better McComb and Pike County as well as his business and design savvy becomes clear within a few seconds.  Phelps’ titles might include artist, designer, activist, community organizer, historian, and fundraiser as the President of the McComb Creative Economy Partnership, a voice for tapping art, design and placemaking. Phelps left McComb as a young boy in the 1970s as railroad jobs became scarce, including his father’s.  He is now taking steps toward reversing this railroad town’s trajectory, especially downtown, which Phelps said was “…even more deteriorated than when I left.”

Inheriting his grandmother's house a few years ago brought Phelps back to McComb and made him a local, though his ties to the national arts scene and the fledgling rural design and arts community buttress his work. Phelps has a broad background at the intersection of world-class arts education and activism, and even a stint diving deep into South Africa’s post-Apartheid Truth and Reconciliation Commission. Phelps intuitively knows what academia is confirming: arts and artists with community-driven processes behind them are catalysts for social change. For Phelps, the deterioration in his hometown's downtown is an opportunity for renewal and growth. He told CIRD about a project turning a historic theater into a performing arts center, noted potential new restaurants coming to town, enthusiastically mentioned to CIRD staff that, “there’s so much potential here.”

History of the jail and beyond

McComb (population 12,000)—like many rural communities—must grapple with a complicated history.  Pike County was a hotbed of violence and voter intimidation during the African-American Civil Rights movement, especially in the early 1960s. McComb’s contributions to music belie the town’s small size. McComb is where Bo Diddley—one of Rock and Roll’s founders—was born and where he played his last chords in public. It is also where Britney Spears was born, and where Lynyrd Skynyrd’s plane crashed in 1977.

While an unabashed salesman for McComb, Phelps offers that local history, painful parts included, undergirds his work. “I saw the connection to rural Mississippi—immediately,” Phelps said of his working on restorative justice in post-apartheid South Africa, which exposed past inequity and brutality as a step toward a brighter, more just, future. Phelps sees to it that a diverse set of stakeholders comprise the McComb Creative Economy Partnership’s leadership. He brought McComb Mayor Quordiniah Lockley to Rural Generation in Jackson, Mississippi's capital, offering that travel to see successful rural initiatives in action leads to stalwart allies back home. Mayor Lockley called CIRD “a learning opportunity that we need to take advantage of” and sees arts-rooted development as a priority, according to Phelps.

The former Pike County Juvenile Holding Center will become the Pike School of Art and serve as an exhibition, artist residency, and education space with a local museum, exemplifying authentic buy-in. “The jail—a youth detention center, actually—was closed about a decade ago when an investigation by the Southern Poverty Law Center found troubling conditions,” Phelps said. He reached out to several formerly incarcerated individuals, engaging with them to mutually acknowledged the trauma that occurred in that space. But even those with painful memories from the jail advocate for the initiative.  “If you turn a jail into something that keeps people out of jail, then you’re doing something good,” one formerly incarcerated woman said to Phelps. “Something good” in the space, as Phelps explained in a video application to CIRD, includes transforming the space that once housed inmates into a gallery with abundant community programs that will hopefully “keep kids out of trouble.”  A modest creative placemaking grant from South Arts a few years ago kickstarted the project. Completing the circle, the Southern Poverty Law Center penned a letter in support of efforts to re-purpose the facility.

Phelps is quick to add positive notes that only McComb can offer. “A lot of the Civil Rights leaders {from the 1960s} are still with us,” he said, commending their continued civic engagement. He added that a Black History Gallery and McComb Railroad Museum help to preserve the city’s history.  He hopes that preservation of local history combined with arts-driven downtown revitalization will complement regional efforts tied to outdoor tourism to capture visitors.  He added that the town’s Main Street initiative, which is tied to the national Main Street program, evolved into more arts-driven work that he leads. “Lots of small things are happening,” he said, while telling CIRD that he hopes and plans for a future that allows him to step back as the work takes hold and becomes sustainable.

Cognizant of his deep academic and professional arts background, CIRD asked Phelps to describe “design angles” accompanying his work.  He first went local. He highlighted the ongoing and potential contributions of architects to maximizing the unique space of Pike County Juvenile Holding Center, which he called “very functional.” One such architect joined him sketching future utilization of the space. “Aesthetics are important,” he offered, “but it’s also important to make space do what it needs to do.” While Phelps’ knows that design is a route to such maximum functionality of space, seeing quality rural design in other communities helped convince him of its importance.

More broadly, he said that design, with assistance from the Citizens’ Institute on Rural Design, could help unify disparate efforts focused on moving the town forward. A State of the Creative Economy report by the Mississippi Arts Commission bolstered such ideas. More people recognizing the economic impact from arts and local talent will have a snowball effect, he predicted, adding that the local Chamber of Commerce is interested because their members are beginning to see arts and design as transformative.

Through his growing network of designers, Phelps gave an example of a “virtual happy hour” among a geographically widespread group of rural arts practitioners that has enhanced his work, even allowing him to check in with peers who were traveling in the U.K.  He touched on the value of national convenings, including CIRD. “I’m really impressed with CIRD thus far,” he said, adding that he really enjoyed CIRD’s Learning Cohort launch in Thomas, West Virginia—a model for rural arts and design-driven economic development. “It’s so amazing,” he said, “to see a small town with so much creativity.” He was inspired by Seth Pitt, who is an artist, gallery owner, and city council member in Thomas widely credited for his outsize role in the town’s revival and for his support of all local artists. As a takeaway from the Summit, he began to ask, “How can McComb get a Seth?”

Phelps concluded with confessing that going to national gatherings including CIRD’s gets him “really, really excited” but that transferring such energy to others back home can be a challenge. Exposure to non-local examples and even bringing outside facilitators to local planning can inspire others, Phelps said, adding that such energy can seed local progress.

At the Citizens’ Institute on Rural Design, we agree. Nothing replaces seeing rural design, planning, and creative placemaking in action powering local economies. We suggest a trip to McComb with a downtown stroll followed by a short stint in the (former) jail. Then, you will be able to see the future of small towns the way Calvin Phelps does.

Interested in learning more about Calvin's work in McComb? A local news channel recently released a video about the Pike College of Art.